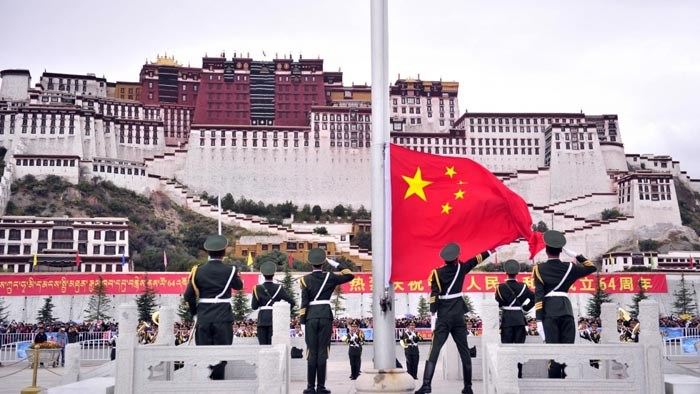 Dharamshala, India —The Chinese Communist Party’s seventy years of rule in Tibet has failed to cultivate its legitimacy and also has failed to win the hearts and minds of Tibetans, said a think tank of the Tibetan government in-Exile, while answering the question of the illegality of Chinese actions —it is becoming more evident the CCP lacks legitimacy in Tibet.

The official media of the Central Tibetan Administration (tibet.net) published a piece by a research fellow at the official think-tank Tibet Policy Institute and it stated that "more than 150 Tibetans mostly young people have resorted to such measures as a symbol of their dissent to an ‘alien’ regime."

As Beijing commemorates the 70th Anniversary of the founding of the People’s Republic of China, Tibet remains a sore point of contention for the Chinese Communist Party since its ‘peaceful liberation’. The notion of ‘peaceful liberation’ is best challenged by Professor Tsering Shakya. In his book The Struggle for Tibet, he raises a central question, “why are the sons and daughters of the ‘liberated slaves’ rising against the ‘liberator’?” (Lixiong, Wang and Shakya, Tsering 2009)

To facilitate the nuanced understanding of the question, I would bring my argument based on the past seventy years of the CCP’s track record of its dealing with Tibetans. In these seventy years, the CCP has failed to win the hearts and minds of Tibetans. This bold claim could be substantiated by highlighting the 10th Panchen Lama’s 70,000 Character Petition, which Mao Zedong labeled it as a “poison arrow shot at the Party by reactionary feudal lords”, as a case in point. Regarding the magnitude of destruction highlighted in the petition, more than 97 percent of monasteries were destroyed and 93 percent of monks and nuns were disrobed.

Ironically, the petition was written four years before the Cultural Revolution, in 1962. The scale of destruction during the ten years of the Cultural Revolution was unfathomable. The implementation of regional autonomy promised in the 17-Point Agreement became virtually non-existence during the Cultural Revolution. The policy implemented in the1990s to denounce the Dalai Lama and name-calling him such as “a wolf in monk’s robe” would hurt the sentiments of Tibetan people. No wonder, the Tibetans would rise against the ‘colonial’ rule.

A similar question, which tackles the notion of the CCP’s legitimacy to rule Tibet was raised by late Professor Dawa Norbu, “Why do the Tibetans rebel?” He argued that “Tibetans realize that they are under the non-Tibetan rule. They also know that the alien rulers have no mandate to rule over them and that they, therefore, lack the necessary legitimacy. No doubt any rule entails some degree of domination, but, according to the logic of ethnicity, a regime is legitimate if the ruling class and the ruled share the same culture, language, tradition, historical memories, etc. This logic makes Han domination in Tibet illegitimate. The Tibetan sense of legitimacy of the rule seems to be heavily bound up with the Buddhist culture of Tibet, which has shaped Tibetan identity, society, and history for the last one thousand years.” (Norbu 1995)

In line with this, the Dalai Lama has remained a symbol of Tibetan nationalism and identity despite the CCP’s effort to ‘modernize’ and make Tibet an economic proud of. No doubt that their motive behind that is to divert the loyalty from the Dalai Lama and devotion from Tibetan Buddhism. I believe this kind of trying to buy the Tibetan people’s loyalty is bound to fail.

The two questions have been figuratively acknowledged by Zhang Boshu of the Philosophy Institute of the Chinese Academy of Social Sciences. He provided a brief analysis of how to resolve the issue of Tibet in which he pointed out that the CCP is the root cause of all the problems in Tibet. He further stressed that “the dictatorship system of the Communist Party, the arrogance and ignorance of leaders, and the extreme leftist policies pursued by them in the Tibetan areas brought terrible disasters to both the religious and laypeople of Tibet.”

As a scholar, Zhang Boshu exposed the CCP’s propaganda in an academic fashion. He wrote that “Chinese of my age grew up hearing songs like “The Red Sun is rising about the snowy mountains” and seeing movies like “Serfs”. In those days we really believed that under the leadership of the Communist Party “the serfs have been liberated” and were living happy lives. Later, after reading a lot of historical materials, I learned that there were many untruths in the propaganda.”

Tibetans right from the beginning defy the Chinese rule. The sense of discontentment was reflected through a number of protests in the past seventy years. The most recent being the 2008 protests that spread across Tibet both laterally in location and vertically in class. A year later on February 27th, a young monk from Kirti monastery in Ngaba County in the Amdo region of north-eastern Tibet, set himself on fire as a protest against Chinese rule that marked the beginning of a series of self-immolation protests in Tibet. Since then more than 150 Tibetans have resorted to such measures as a symbol of their dissent to an ‘alien’ regime. The majority of them were young and were born after 1959. In fact, 26 of them were at the age of 18 or below.

Therefore, the transformation of the Tibetan movement in recent years, where younger generation Tibetans shouldered the responsibility of carrying forward their elder generation’s struggle, has trivialized the shortsighted perception in Beijing that the Tibet issue will vanish in thin air after the passing away of the Dalai Lama.

In these seventy years of the CCP’s rule in Tibet, the Tibetans continue to look up to the Dalai Lama.