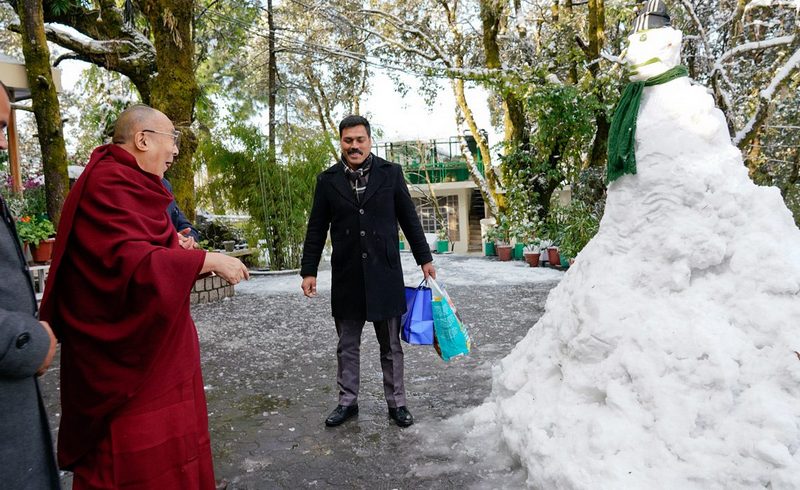 His Holiness the Dalai Lama pleased to see a snowman in the driveway of his residence in Dharamsala, HP, India on February 8, 2019. Photo by Ven Tenzin Jamphel

Dharamshala, India — People of Tibet will never forget the government and people of the United States for their decades-long support for the just cause of Tibet, His Holiness the Dalai Lama said in a video message.

The video message by His Holiness the Dalai Lama released on the occasion of "THANK YOU AMERICA" event organised by the Office of Tibet, International Campaign for Tibet and Capital area Tibetan Association at Washington DC on February 12, 2019.

On the occasion of this “Thank you America” celebration, “I want to thank everyone involved in its organisation including the Office of Tibet, International Campaign for Tibet and local Tibetans in the Capitol area.”

“On the one hand America is a super-power, a nation that stands for freedom, democracy and the rule of law. It is an important nation, a leader of the free world, and a nation the rest of the world trusts and has confidence in,” His Holiness said, adding: “During the WW-I and WW-II America became the guardian of the precious ideals of freedom and democracy.”

“We Tibetans, already familiar with the British, became acquainted with Germans and Americans too. As the upheaval in Tibet began, we placed great hope and trust in America,” the spiritual leader said.

“In the beginning, we approached the United Nations and America supported a resolution tabled at the UN by El Salvador and others. America has been there for us and has supported our just cause sincerely right from the start.

“Around 1942- in the middle of WW-II — llia Tolstoy and his colleague arrived in Lhasa. Roosevelt was then the US President. He sent a letter, an autographed photograph, a silver boat and a pocket watch with them for me. I had no interest in the letter as I was still young then, but I was interested in this watch, which I still keep with me.

“Once when I was in America, Speaker Nancy Pelosi said she’d like to see this watch. On the next visit I took it with me and showed it to her. And she passed it around the group of about ten people who were with us,” the Nobel Peace Laureate added.

“So, I have personally had relations with America since 1942. Once I was to visit America myself, I met several US Presidents. When I met Mr Obama— who was also a Nobel Peace Laureate —he gave me a copy of Roosevelt’s letter, and of the later letter Truman sent. The evidence of our ongoing relations with America shows that the US government and its Presidents have shown concerns and supported us earnestly for many decades.

“Now that I am nearly 84 years old, I look back on our relations with America —many of our friends are no longer with us. But the spirit of their heartfelt and dedicated support lives on. The Tibetan people will never forget their kindness. Therefore, as you hold this “Thank You America” celebration, I’d like to take the opportunity to say, “Thank You America”, myself.