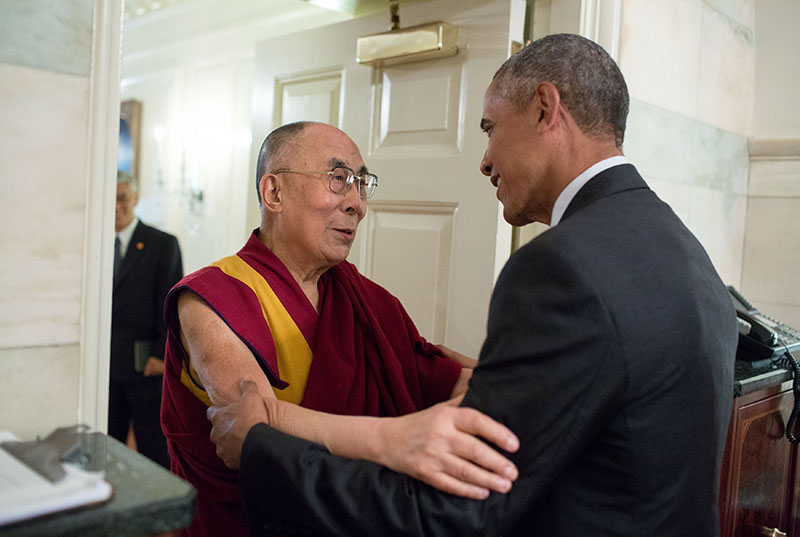 Washington, DC – US President Barack Obama met with the spiritual leader of Tibet, His Holiness the Dalai Lama Wednesday morning (June 15, 2016), at the White House, marking the fourth time since Obama took office.

President Obama expressed his government support for the "Middle Way Approach", which seeks "a Genuine Autonomy" for all three traditional provinces of Tibet and encouraged "direct dialogue" between His Holiness the Dalai Lama and his representatives and Chinese authorities, despite a strong warning by China that it would "damage diplomatic relations."

"President Obama expressed support for the Dalai Lama's Middle Way Approach during their discussion, and encouraged direct dialogue between the Dalai Lama and his representatives and Chinese authorities," the White House said in an official statement issued after the two Nobel Peace Prize Laureates' meeting, on June 15.

"The President accepted the Dalai Lama's condolences for the shooting in Orlando, Florida on June 12 and commended the Dalai Lama for his efforts to promote compassion, empathy, and respect for others," the statement said.

"The President and the Dalai Lama discussed the situation for Tibetans in the People's Republic of China, and the President emphasized his strong support for the preservation of Tibet's unique religious, cultural, and linguistic traditions and the equal protection of human rights of Tibetans in China," said the statement.

"The President encouraged meaningful and direct dialogue between the Dalai Lama and his representatives with Chinese authorities to lower tensions and resolve differences. In this context, the President reiterated the longstanding U.S. position that Tibet [Tibet Autonomous Region] is a part of the People's Republic of China, and the United States does not support Tibetan independence.

The statement reads, "The Dalai Lama stated that he is not seeking independence for Tibet and hopes that dialogue between his representatives and the Chinese government will resume. The President and the Dalai Lama agreed on the importance of a constructive and productive relationship between the United States and China."

"The President welcomed the Dalai Lama's leadership on climate change issues, and expressed support for the Dalai Lama's efforts to raise awareness of the importance of limiting global warming, including to protect the Himalayan glaciers and the environment on the Tibetan plateau," the statement includes.

This was President Obama's fourth official meeting with His Holiness the Dalai Lama at the White House in last 8 years.

In an interview with Fox News on June 14, His Holiness the Dalai Lama said he and Obama talked about the current situation in Tibet.

The Nobel Peace Prize Laureate denied he was seeking independence for Tibet and that it was in Tibet's interests to remain part of China, "provided we should have full right for preservation of our own culture, or rich Buddhist knowledge, knowledge of Buddhist philosophy, these things."

Tibetan spiritual leader also noted in the interview that Chinese President Xi Jinping had said Buddhism was an important part of Chinese culture. "So this is something new, for a leader of a Communist party, you see, mentioning some positive things about leader of Buddhism, wonderful."

But the regime in Beijing considers the Tibetan leader a "separatist", seeking Tibet's independence, without usually providing a clear and reasonable explanation to the international community for how he seek Tibet's separation from China.

A day before the two leaders' meeting, Chinese ministry spokesman Lu Kang said the meeting would encourage "separatist forces." He urged Washington to abide by its promises to recognize that Tibet is part of China and cease any support for Tibet independence.

China's Foreign Ministry said earlier it had lodged diplomatic representations with the United States over the planned meeting, saying it would damage China-US ties.

The truth of the MWA and China's epic fail?

Tibetan government in-Exile says that the 'Middle Way Approach (MWA) represents the official position of the Tibetan people on how to peacefully and sustainably resolve the current situation in Tibet. It is a position that is also shared by His Holiness the Dalai Lama.'

MWA seeks "A Genuine Autonomy" for the Tibetan people within the framework of the the People?s Republic of China (PRC) constitution and Law on National Regional Autonomy – defines areas such as the "application of a single administration for the Tibetan nationality in the PRC", the "nature and structure of autonomy" and the "11 Basic Needs of Tibetans".

However, the Chinese leadership rejects the proposal, falsely claiming that the MWA seeks a "Greater Tibet", "Higher Degree of Autonomy," "covert independence" and "independence in disguise", without providing a reasonable explanation to the Tibetan people and the international community.

The government in-Exile also says that the MWA seeks only "a genuine autonomy for the Tibetan people" that would operate within the framework of the PRC: its constitution, territorial integrity and sovereignty, its' three adherences?1 and the hierarchy and authority of the Chinese Central Government.

For Tibetans, the MWA implies not seeking "independence" for Tibet, but "genuine autonomy." The Tibetan side also says this vision is articulated in the "Memorandum on Genuine Autonomy for the Tibetan People", which was presented to the Chinese government in 2008."

During the last round the Tibetan side also submitted "Note on the Memorandum on Genuine Autonomy for the Tibetan People", to the Chinese government, saying it further seeks "specific concerns" raised by the Chinese side with respect to the "form of single administration; political, social and economic systems; public security; regulation of population migration; language; and religion." However, Beijing once again rejected the proposal.

The government in-Exile says after six decades of Chinese occupation, 'Tibetans inside Tibet expressed their categorical rejection of Beijing's failed policies, in Tibet, through self-immolations since 2009.'