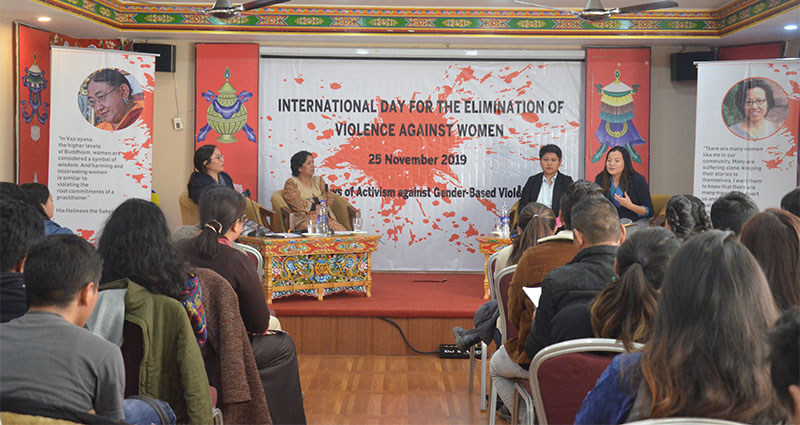 Dharamshala, India —A number of firsthand accounts of sexual assault against women in exiled Tibetan communities in north India have reportedly surfaced with the campaign against Gender-Based Violence initiated by the Tibetan Centre for Human Rights and Democracy (TCHRD).

The survey taken place in eight Tibetan settlements across northern India has resulted in more than 30 stories of women coming out and shared their traumatic experience of sexual assault including rape, domestic violence, molestation and other crimes against women.

The TCHRD claims it aims to showcase one narrative each day out of the 16 selected narratives of abused faced by women for the next sixteen days starting from 25th November to 10th December 2019. The Tibetan NGO says it joins the UN’s annual campaign of 16 Days of Activism against Gender-Based Violence (GBV). The sole purpose of this global campaign is to end all forms of violence against girls and women which begins on International Day for the Elimination of Violence Against Women, 25 November to end on Human Rights Day 10 December.

Gender-based violence based affects every girl and women irrespective of race, class, religion, ethnicity or economic background. Crime against women is a significant public health issue and violation of women’s human rights. The recent statistics of the World Health Organization show that 15 million girls between age 15 and 19 worldwide have experienced forced sex at some point in their life. Globally, as many as 38% of murders of women are committed by an intimate partner.

With the highlight of the 16-day campaign, TCHRD will share 16 stories of gender-based violence faced by Tibetan girls and women in exiled Tibetan communities in India. Conducted and shot in eight Tibetan settlements across northern India. These films focus on gender inequality as a contributing factor to violence against women and encourage more women to break the silence surrounding GBV crimes. The women of these films appear to other survivors to speak out and demand justice. Their stories depict how many GBV cases go unreported, allowing the perpetrators of these crimes to remain unpunished.

TCHRD’S researcher Tenzin Dawa and videographer Tenzin Phuljung interviewed civilian and monastic residents in eight of the Tibetan settlement in north India. The regional chapters of the Tibetan Women Association’s aid have made possible for many of the stories brought forward to the attention of the public by the TCHRD.

With this campaign, the TCHRD aims to build a community free of GBV crimes, the need to inform and educate all individuals about gender-based violence. Most importantly, they need to teach GBV prevention and promote gender equality and make services available to GBV survivors. To end the stigmatization of GBV survivors and to ensure that these survivors don’t fall prey to ‘victim-blaming’.

The 1st day of the campaign takes place at Conference Hall, Hotel Norbu House, Mcleod Ganj, Dharamshala, with a screening of promotion video for five minutes and Tsering Tsomo, executive director of TCHRD welcoming the more than 30 people in attendance. A message clip from His Holiness the Sakya Trizin on compassion and how a woman should be treated with love and kindness. As far as Vajrayana is concerned, women are the symbol of wisdom and harming and mistreating women is similar to a violation of the root commitment of a practitioner peaches H.H THE Sakya Trizin. He also adds that all forms of lives are equally important and precious therefore mistreating them is uncalled for.

Miss Tenzin Dawa, the TCHRD researcher reported the finding from the field through the interviews she had first-hand with the victims. The uncooperativeness of the settlement authorities due to lack of awareness and training on the subject at hand. Some interviewees’ evasion in interacting with the interviewer for fear of social stigma and victim-blaming consequences. And Tenzin Peljung’s account of men not being in favor of this activity undertaken by a male member of the society.

Followed by the start of breaking the silence around GBV with Kunsang Dolma’s personal testimony about how she was raped as a 15-year-old girl by one of the town’s men in her hometown Amdo Tso-ngon. How the blame has become a victim’s fault. She was traumatized by this experience and the social stigma which made her town people and males in the family shun her. Her own father and brothers holding it against her and she was told to go away from home. Her traumatic experience of rape as a young girl still haunts her. She is able to open up and talk about her experience in her autobiography entitled, ‘a hundred thousand white stones’. She wants all girls out there including her daughters to live safely and to break the silence against male-oriented notions in society.

The event continues with the subject taken by the chief guest of the 1st-day event Rajni Vyas, the Mayor of Municipal Corporation, Dharamshala, who speaks about the violence faced by women living in India. How raping, eve-teasing, and sexual assault go unreported. How all these consequences are pointed toward what a woman wears and how she behaves. She firmly believes that sexual assault against women, children and all members of LGBTQ happens not merely because of how they dress but it’s the mentality of man and phallocentrism that males in society hold.

21% of students have known cases of sexual violence faced by their friends. The findings have definitely invoked certain realities in the audiences presented and the need for a better comprehension among the public in regard to gender sensitivities. The 1st-day event concluded on a success note with an answer and question session received attentively by the enthusiastic audiences with a note of thanks by Tsering Tsomo, the executive Director of the TCHRD at the end.