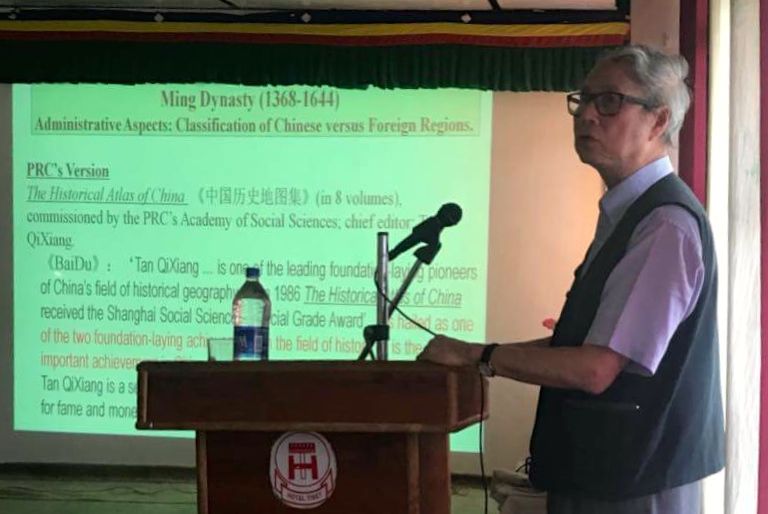 Dharamshala — A presentation on pre 1949 China and Tibet was given by Professor Hon Shiang Lau on April 21, showing that Tibet was never part of China through historical documents of Ming and Qing dynasties.

The lecture was organized by Tibetan Youth Congress in the Hotel Tibet, Dharamshala and around 30 people gathered for the event. Professor Hon Shiang Lau delivered his analysis of historical records of Ming, Qing that he suggested proved that Tibet was never a part of China.

His historical proof included more than 3000 years of historical documents such as text, daily records, and historical maps. He said that his research paper's primary aim is to help the Chinese people understand and know that Tibet was historically never a part of China, unlike the Chinese Communist Party claims. But he also said the Tibetan regions outside the Tibet Autonomous Region has a complex history.

He, as a Chinese, wants to prove that Tibet was an independent country, he added. Professor Lau continued his lecture on the histories of Ming and Qing dynasties and state that Tibet was treated as foreign country of China during Ming and Qing dynasties, administratively didn’t collect tax from Tibet as they did other part of Chinese territory and individually, Ming Emperor Wuzong sent an ambassador to invite Tibetan monks.

According to the Chinese historian, an abundance of unequivocal evidence in Chinese pre-1949 primary-source governmental documents and government-sanctioned publications show that, contrary to the PRC line, Tibet was never part of China before 1949. He added that in The Structure of Great Ming Unification Record, not only Tibet excluded from the China’s territory, it is explicitly labeled as foreign entity and grouped with many other equally foreign entities.